At Gamonal, the Spanish Army led by the Conde de Belvedere barred the way to the French marshal Soult's Army Corps (see the map). The game was played at the @MilesGloriosusClubRoma on August 27, 2022, with Black Powder Rules (Albion Triumphant Vol. 1 additional rules). In the following pictures, you see some green marker, indicating Disorder, and some dead and wounded miniatures, indicating the casualties.

The Army lists have been modified, due to a strong disparity in favour of the french in the real history. To make playable the game, the French Forces were drastically reduced (mainly the cavalry), and the Spanish Forces were a little bit increased.

During the game a few mistakes were made: in the first 4 turns "grazing fire" was allowed, even if the shooting artillery (mainly the Spanish) and the target were placed on different levels; the "wavering" character were wrongly given to Spanish Artilley, Guardsmen and Grenadiers, causing a few early withdrawal. 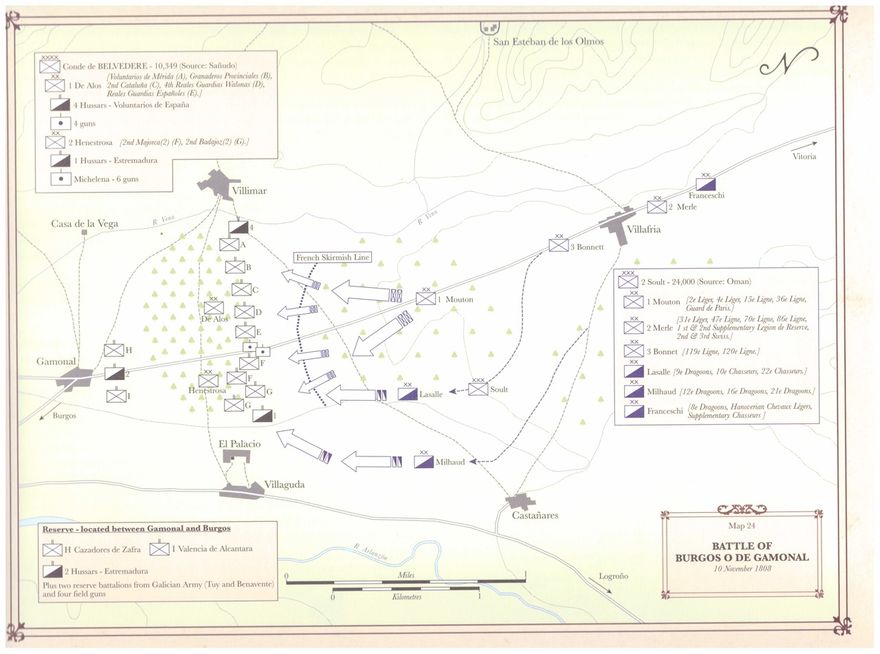 This map is taken from the "The Peninsular War atlas" by Col. Nick Lipscombe, Osprey.

Initial Spanish disposition. The 3 Brigades are deployed in depht in 3 lines. Additionally, the 2 weaker brigades detach 1 militia batallion each in Gamonal. 1 Militia btn. is in Villimar and 1 in El Palatio. 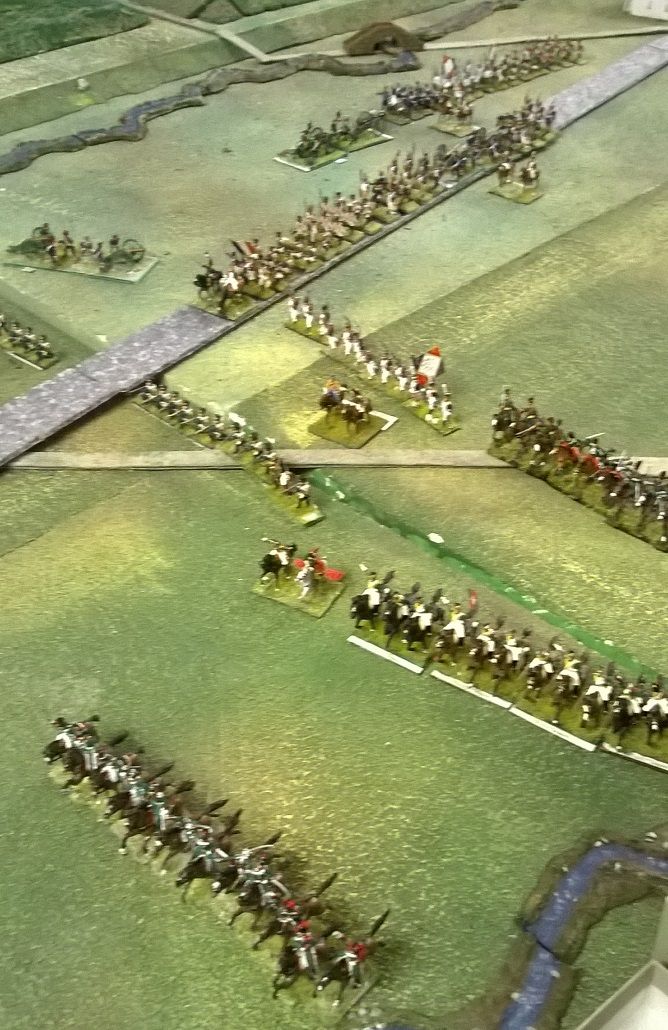 Soult's infantry gets in boldly in march column. Even more eager for glory, the cavalry rushes to the Spanish right wing.

But the Spanish get ready to check the charge 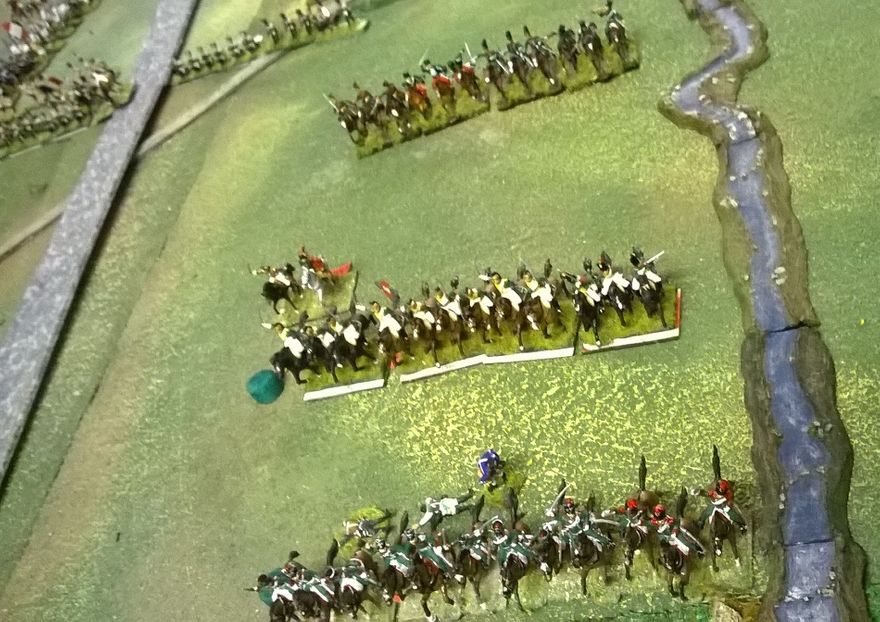 Turn 3. Vive l'Empereur! But the Spanish defensive fire checks the chargers. In effect, I made a mistake, granting "Grazing fire" to the Spanish artillery, even if it was deployed on a higher level than the target. The mistake war later found and corrected in the 4th turn. 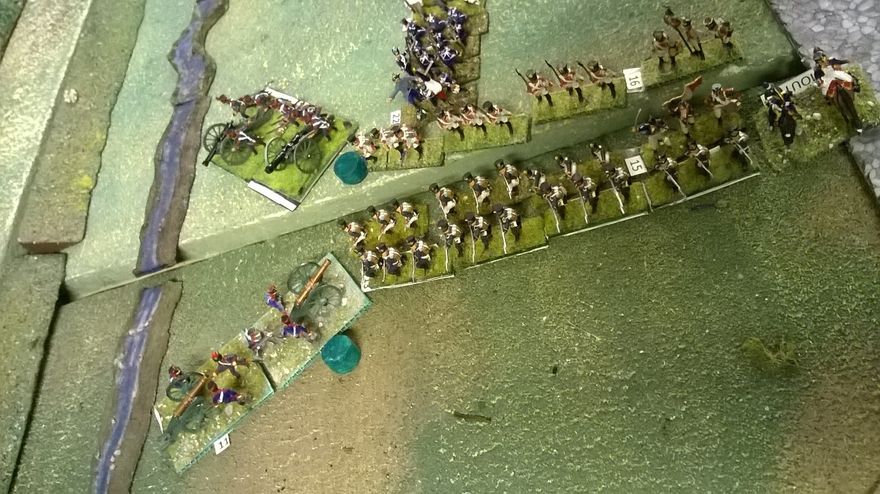 Turn 3. Merle's infantry deploys to attack on the right, supported back by Bonnet's. The Spanish De Alos' artillery causes some Disorder (here too, "Grazing fire" shouldn't have been allowed). 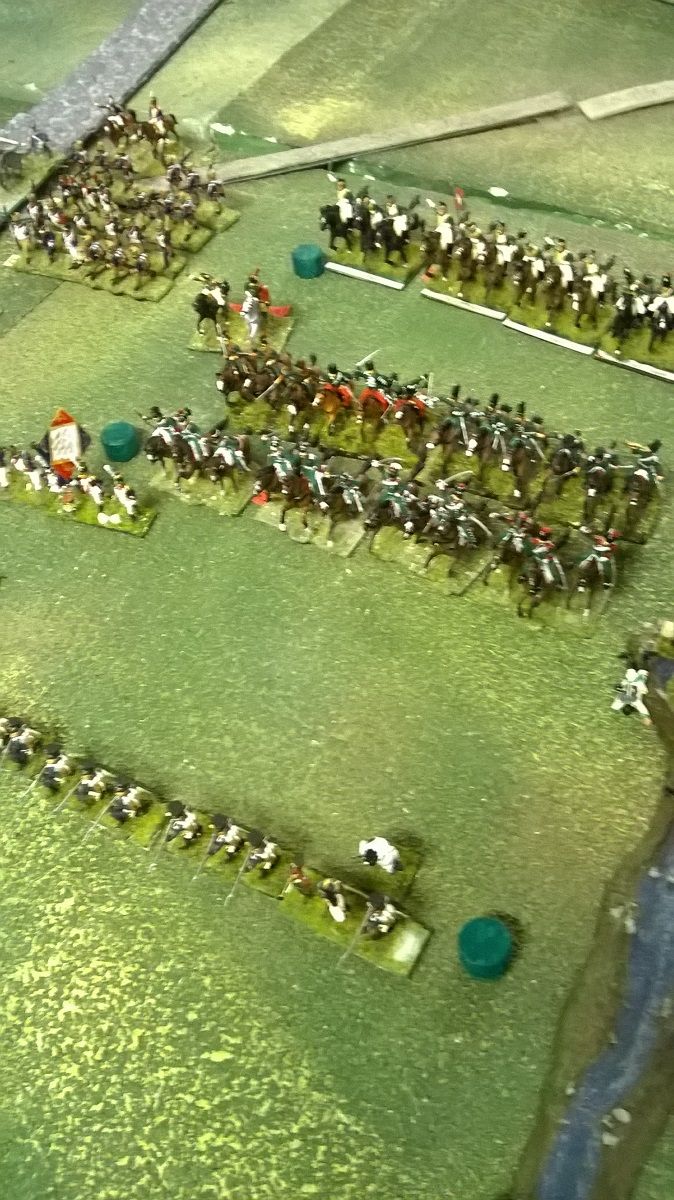 Mouton's infantry catches up with the cavalry and deploys to weaken the Spanish right wing, in preparation for the charge. 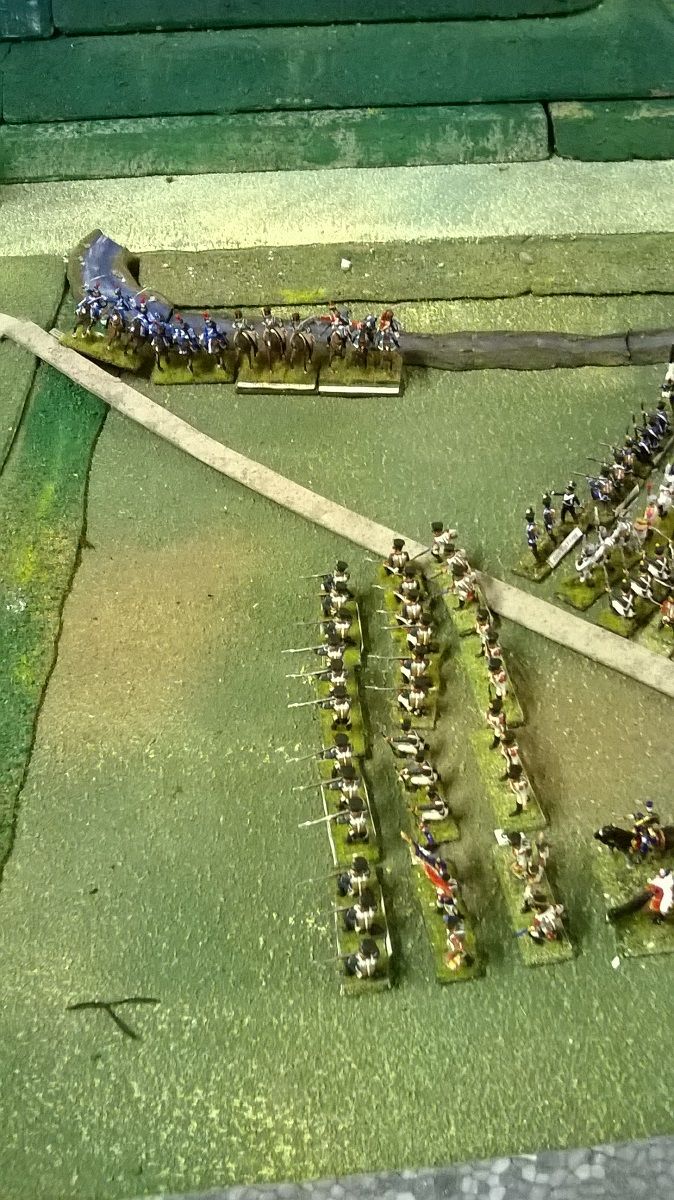 Turn 4. The Spanis Hussars on the left attempt a flankig charge against Merle's infantry, but the dice roll allows just one movement. Bonnet's infantry moves to check further progression. 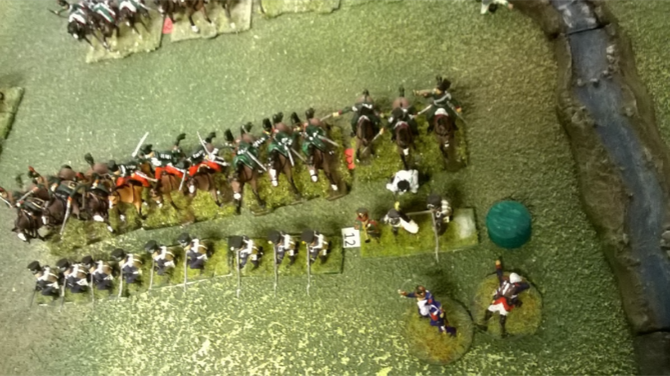 Turn 5. Under infantry cover, the French cavalry closes in. 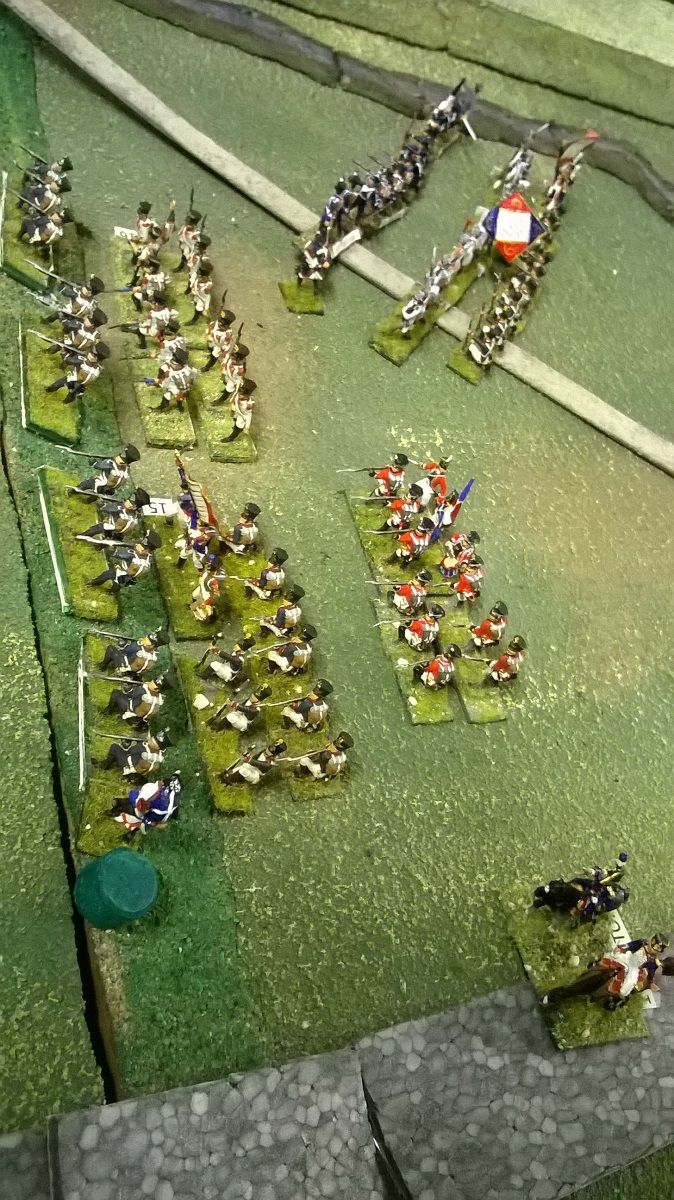 Turn 6. In the centre, Merle's infantry closes in, too. 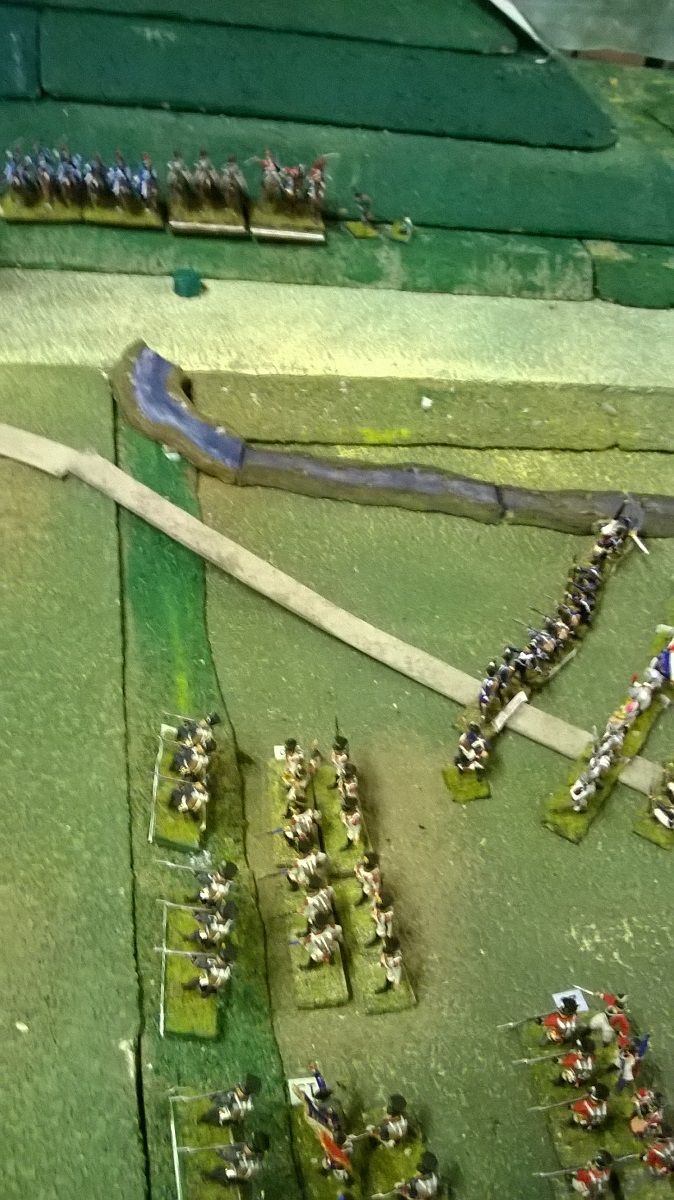 Turn 5. The Spanish Hussars, having been shaken by Bonnet's infantry and artillery fire, withdraw. 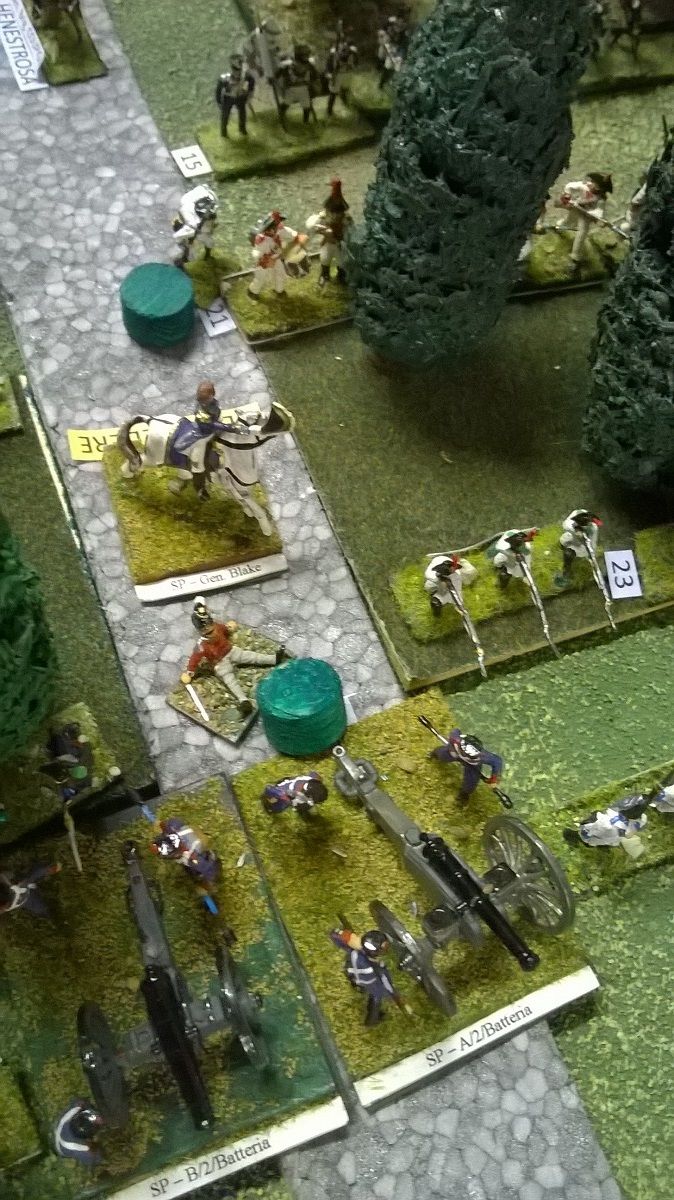 Turn 5. The french attack in causing som damage to the Spanish centtre 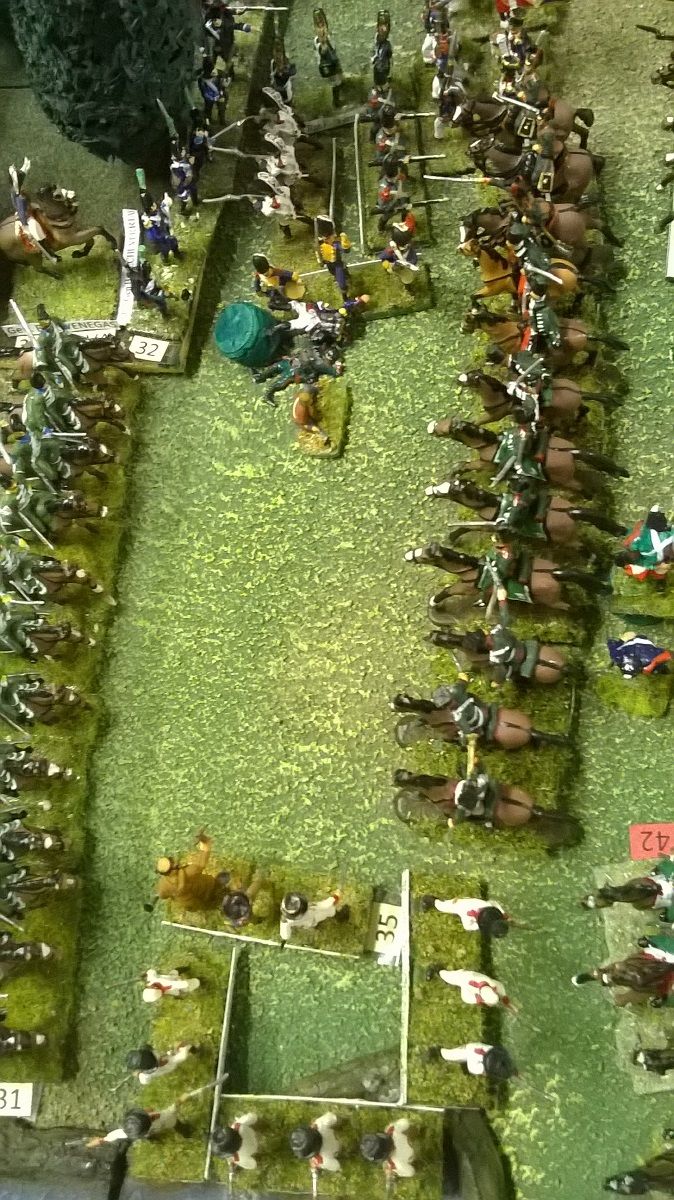 Turn 6. Henestrosa's artillery having been defeated by the French light infantry fire, the cavalry try to charge the Provincial Grenadiers. Theyform an hasty disordered square, so the Dragoons are able to close the charge. 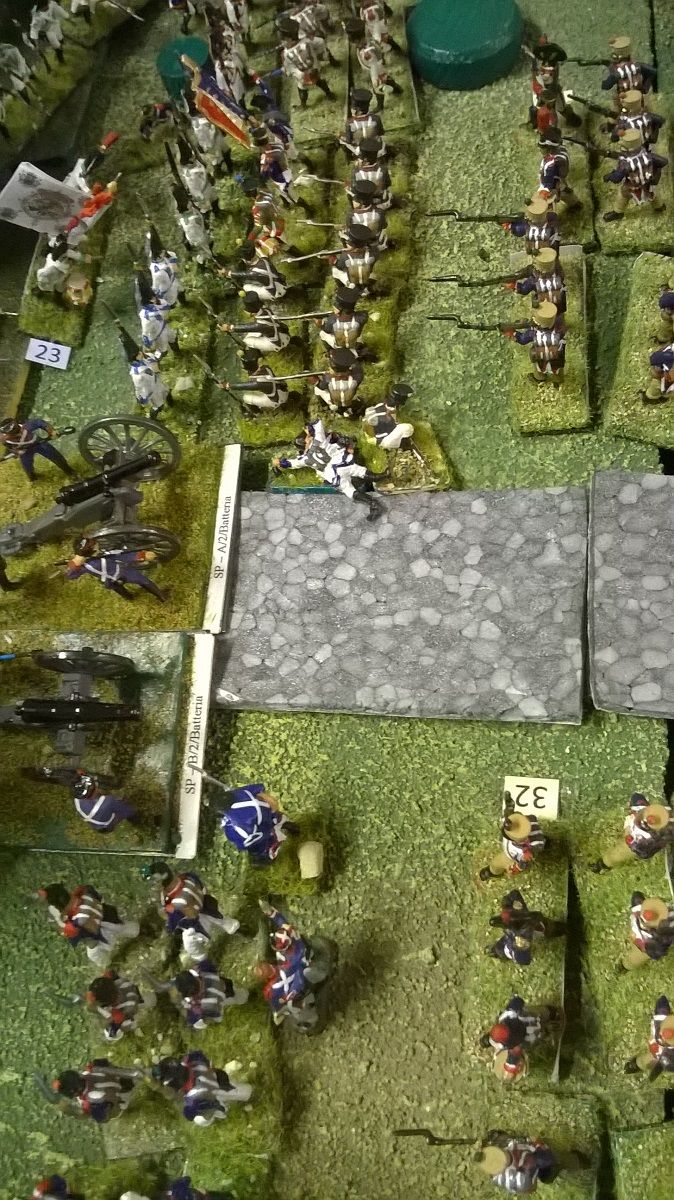 Turn 6. Merle's infantry, too, charges in. 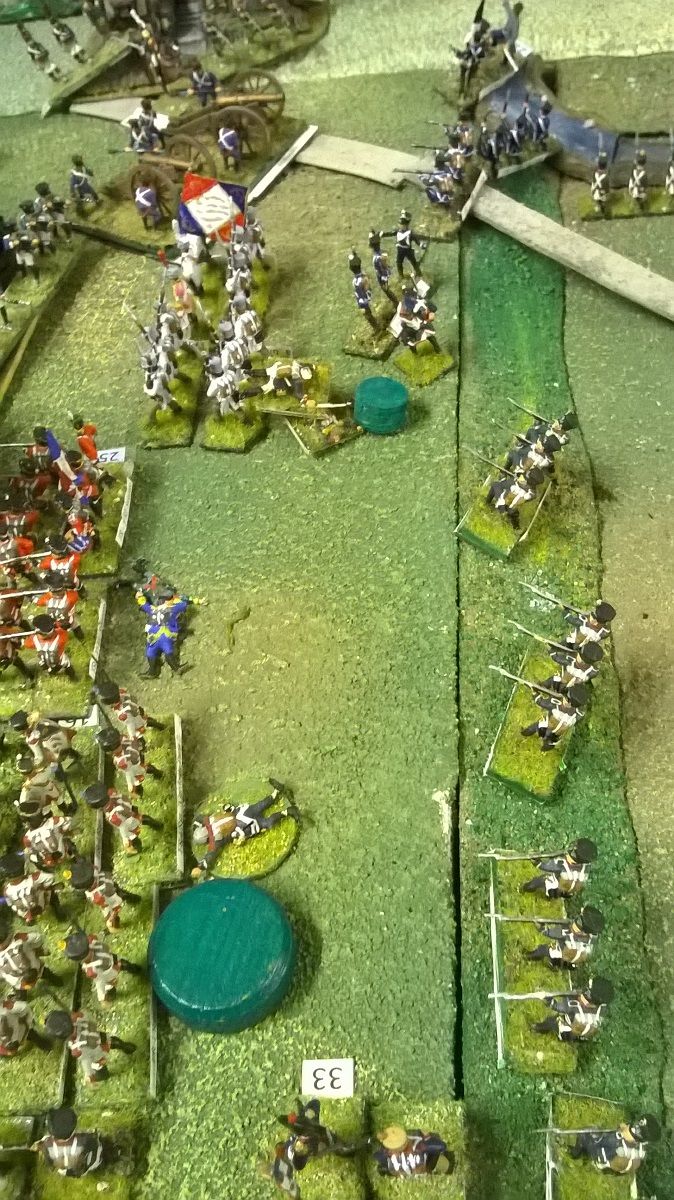 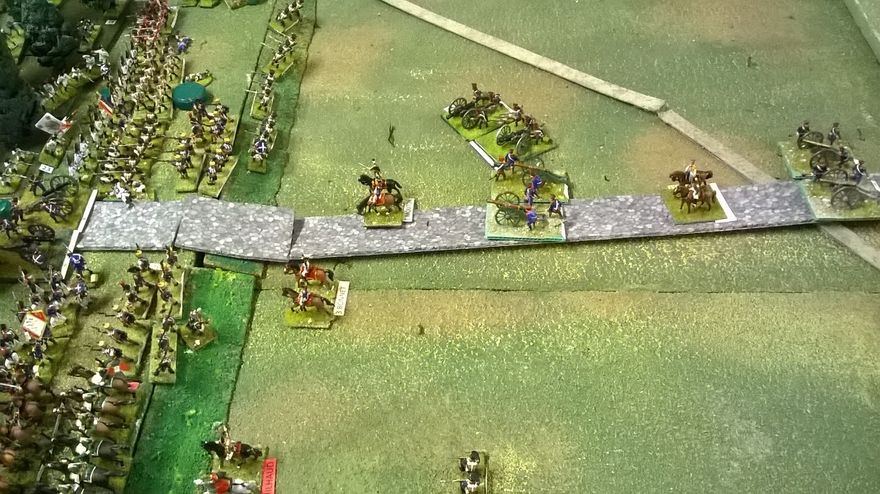 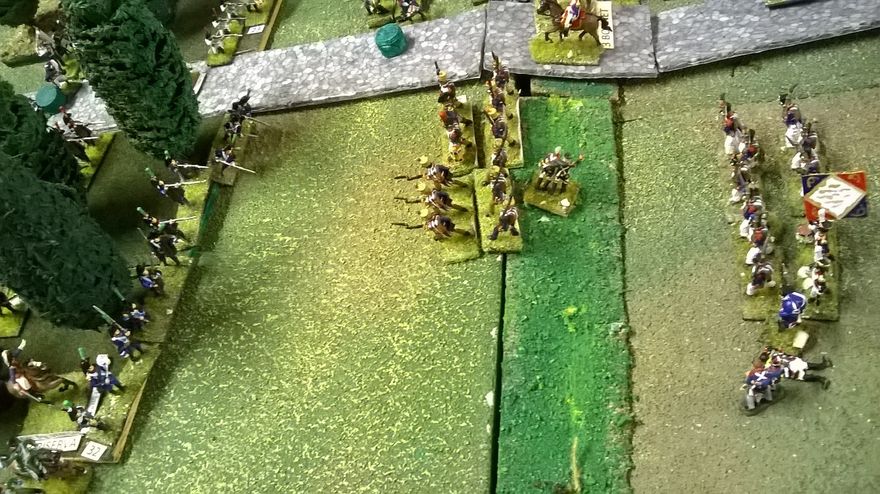 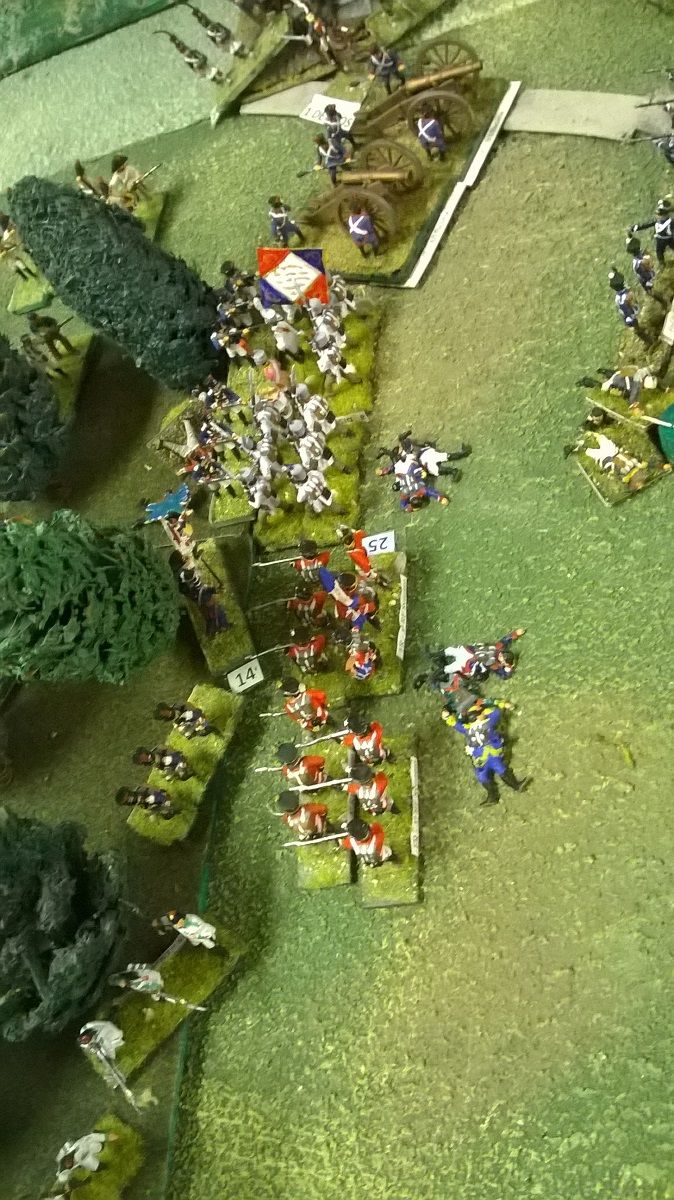 Turn 7. Merle's charge is checked, too. At the end of this turn,casualties are verified: both the Spanish and the French have 2 brigades out of game (The Spanish 2 over 3, the French 2 over 4). The game ends with a draw. 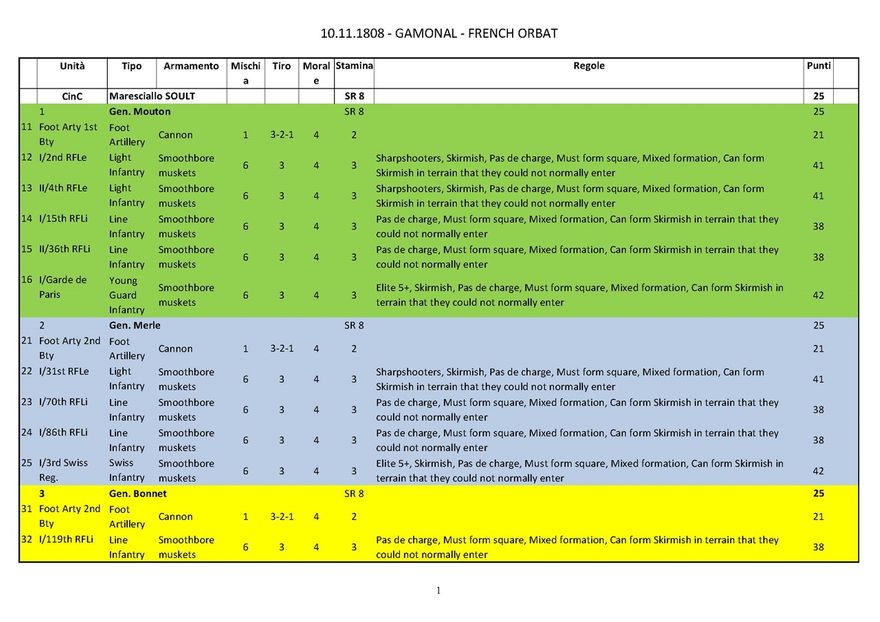 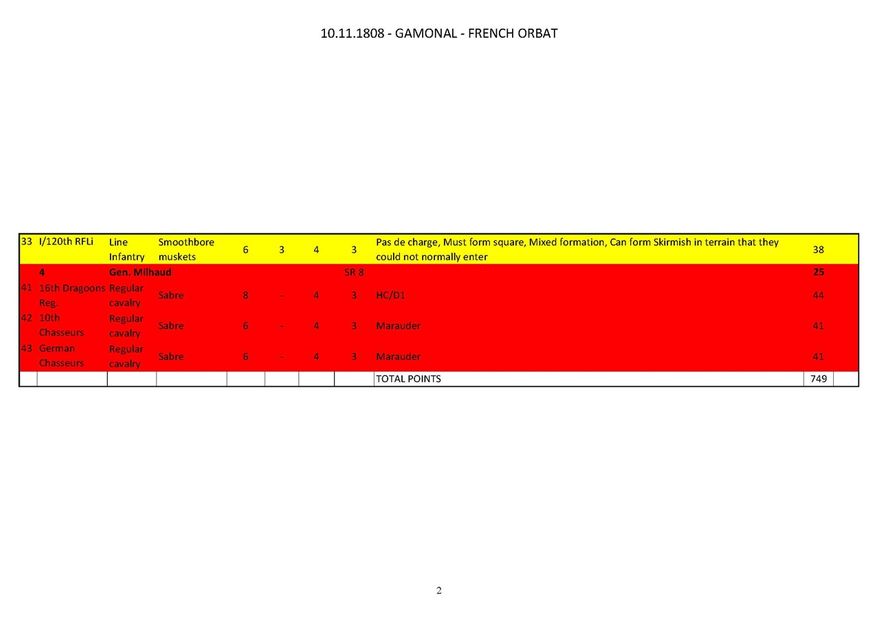 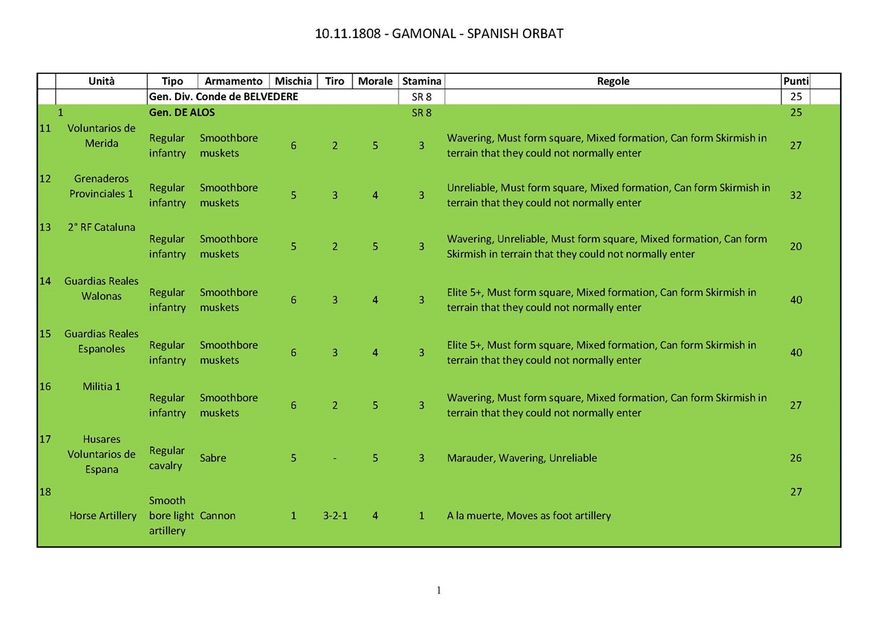 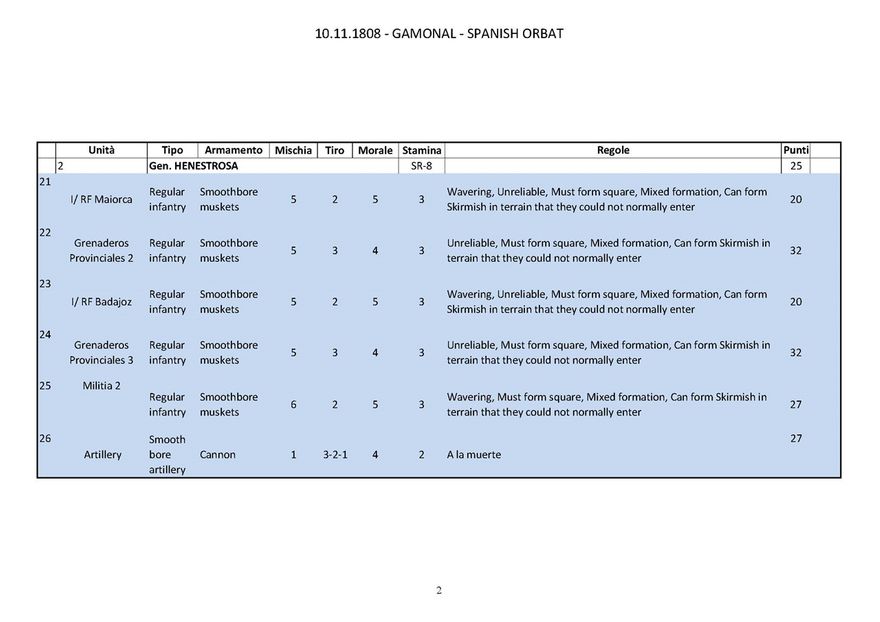 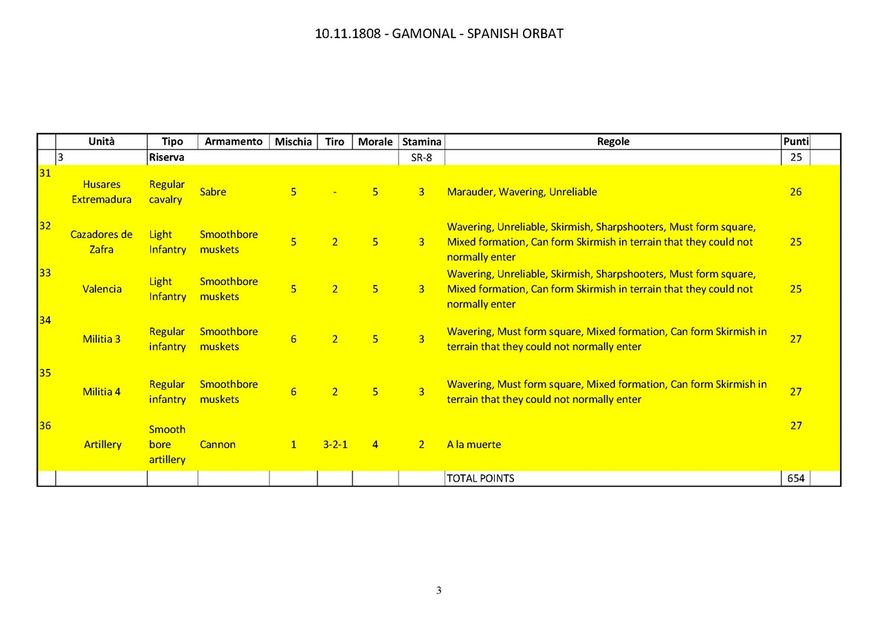